Hello Alchemists! Sorry if blue players were kept itching for my reviews on Rivals of Ixalan’s blue cards but let me get right on it!

Blue colors are usually bad in limited because of its very low density on threats, absence of removal, and counter magic is essentially bad in an environment where people value curve and play with a lot of creatures. However, I think some cards in Rivals attempt to redeem blue as a viable color in limited AND constructed! 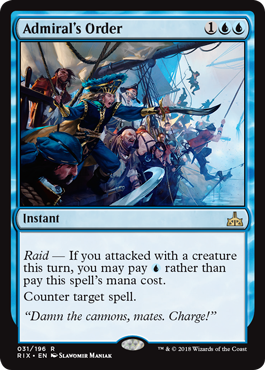 Settle the Wreckage has been the bane of many aggro decks but thanks to Admiral’s Order, Settle becomes less viable if you plan to use it on your fourth turn. Energy decks will surely have a couple of these in their sideboard, and I will not be surprised if Pirate aggro decks start sprouting up in local FNMs. Is this worth its dollar value now? I don’t think so because most aggro decks won’t use blue heavily like RG Pummelers, Mardu Vehicles, RG Dinosaurs and the likes. Although I’m sure the UG Pummeler variant will welcome this with arms and legs open! 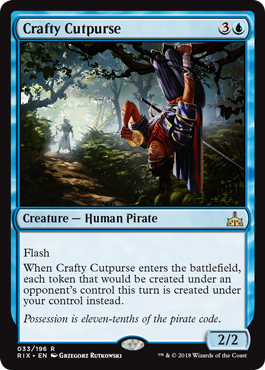 Generally a 4-mana 2/2 is not good. Flash makes this a bad body to block BUT this card have some application against tokens. The problem here though is that if you are against voluntary token creations like Whirler, the opponent can opt to activate it one at a time and deprive you for more than 1 free thopter token. But for tokens that come into play that happens as a result of an effect like Hidden Stockpile’s revolt trigger or a Treasure Map flipping – then Craft Cutpurse might be good so you can get multiple servos with many stockpiles out, or steal the 3 treasures from map instantly. I say this card has minimal use, unless the opponent casts Brass’s Bounty. 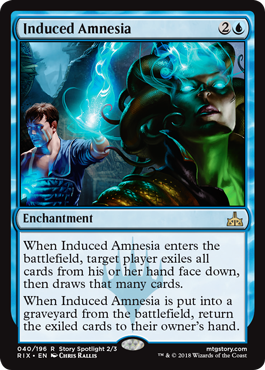 Induced Amnesia is a one-time Scroll Rack in standard and it’s actually really good if you can find an efficient way to cast and remove this card (there is one in Blue as well). I think control decks might play around the application of this card but as of now I think it’s very limited. You won’t be able to cast this card if you have the removal in your hand because it gets tucked with it. I hope there is a way to sacrifice nonland permanents or enchantments in Dominaria but till then I will reserve my ratings for this card. Artwork is great though! 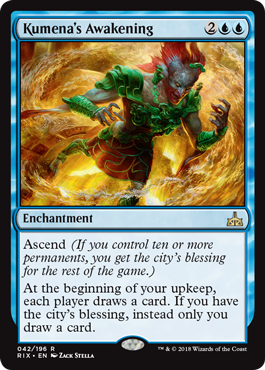 Howling Mine effects are pretty sought after similarly how Phyrexian Arena-like effects are quite heavily played but Kumena’s Awakening looks very weird. Cards I can see comparable in card advantage would be Bounty of the Luxa which also gives you mana, Search for Azcanta which comes down earlier and ramps you at the same time. Blue is also a bad color to help you get to Ascend so you might end up not playing this card and risk your opponent drawing cards until you get to Ascend. I don’t like it and I think this card will only see play in the UW tokens/GPG/Anointed Procession deck but not outside this shell. 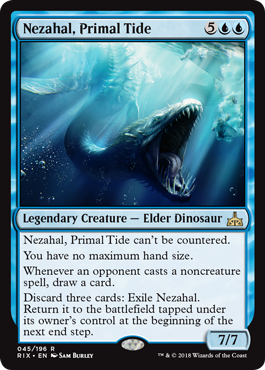 Pearl Lake Ancient got a reprint! I am very excited to see control decks use Nezahal as their win condition. I can foresee mono blue control that uses Primal Amulet to make spells cheaper and get double the value from draw spells and keep their hand full only to slam Nezahal and have enough cards to keep it safe from sorcery removal. I also mentioned how self-sustaining cards are really good and Nezahal fits this description nicely. He fills your hand and unlocks your hand size, and together with Kefnet and Torrential Gearhulk, a mono blue midrange deck might just be around the corner. 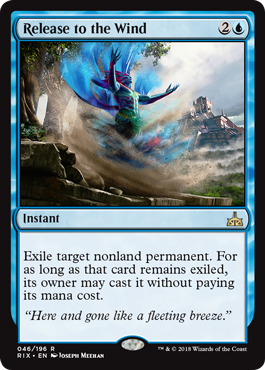 When I read this card for the first time I told myself “Why did WotC print such a useless card and made it rare?”. But after reading it a couple of times, it’s actually a pretty broken card! You can target a Planeswalker of yours after activating it, cast it again, then activate again. Imagine Chandra dealing 4 damage twice and still have 1 loyalty counter left – sick! Or maybe a Noxious Gearhulk entering the battlefield killing a creature. Next turn you swing to deal 5, then “cast-blink or ‘clink'” it (I’m coining that!) and hit another dude. I spoke about Induced Amnesia a while back and it’s another juicy card to target with Release to the Wind. I think the potential to break this card is there, I’m just not yet ready with a shell that can abuse this. It’s fairly cheap so I don’t mind getting a playset of this early in the release. 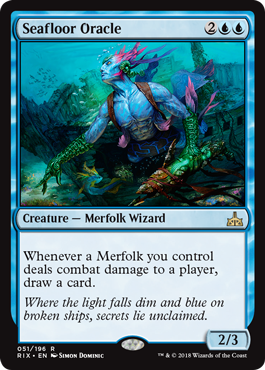 I spoke to some modern fish players here and abroad and they agree that Seafloor Oracle might find a home in the modern fish deck thanks to Spreading Seas and islandwalk from the lords. In standard though, I think a 4-mana that can draw you 2-3 cards thanks to unblockable merfolks like Mist-Cloaked Herald and River Sneak could bring a deck together. Definitely casting this card on turn 4 is a risk because it’s within reach of Harnessed Lightning, Abrade and Lightning Strike but cards like Dive Down together with green cards like Blossoming Defense can improve the survivability of Seafloor Oracle. It looks like a great addition to the fish lovers and surely this card will see some play post rotation if merfolks get additional love in Dominaria. 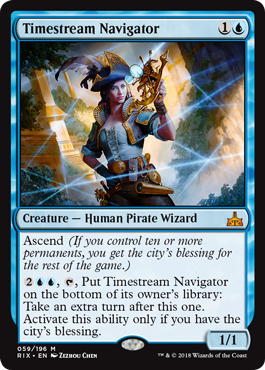 Extra-turn cards always get the most hype when spoiled and everybody jumps to the immediate conclusion that the card will be broken, unfair, abusive, blah blah blah. Let’s take a look if Timestream Navigator actually falls under these description.

It dies to ALL possible removals in standard thanks to its 1 toughness. Ascend is extremely hard to achieve in blue. And it can’t be used the turn it enters the battlefield because of summoning sickness. Overall I think this card is bad. In EDH this might be another great additional-turn card but I don’t see this card breaking standard anytime soon. 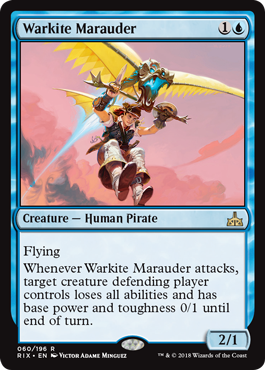 I’ve tinkered with a Flying Pirates deck using cheap 1 and 2-mana flying pirates together with Favorable Winds and it proved to be weak against a lot of decks. In Rivals we get additional flying pirates and Warkite Marauder surely got my attention. I like how it’s a 2-mana 2-power flier and it can shut down a potential blocker all at the same time BUT there are only a few creatures worth frogging. Another sad thing is that it’s until end of turn. I am excited to use this card in the Favorable Pirates deck don’t get me wrong, but this creature has to be in a deck with cheap removal to maximize his ability.

That’s all for now, I’m reserving black for last because it’s one of my favorite color entering into Rivals. Then after that, we go to Multicolored and the colorless lands!

To those who will play at the pre-release this weekend, good luck and have fun!