Today is day 2 of Rivals of Ixalan Pre-release and I’ve been seeing a lot of people posting their fantastic pools, amazing records and cool limited card synergies they stumbled on accidentally. Fun times and it’s going to get even more fun! Let’s now do the rare review series for black – the most interesting color for me personally! 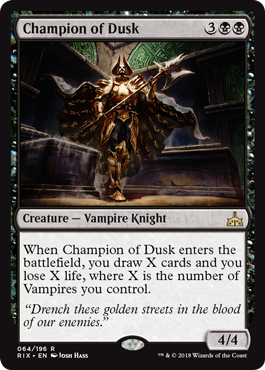 Champion of Dusk spells G-A-S in the vampire shell. It costs just right for a 4/4 sized body and rewards you for playing a lot of vampires. Now the problem – there are very few sac outlets that allow you to control the amount of vampires you have on the board. Now, you can say that you can count how much you’re willing to invest on the board but you eventually delay the game and allow the opponent to find answers and sweepers preventing you from benefiting from Champion. Alone he draws you 1 card and makes you lose 1 life – similar to a Phyrexian Arena on a stick and I think that’s his main purpose – to draw you 1 or 2 cards but not more than that. 5 drops don’t usually go into low-to-the-ground aggressive decks so I think this might find a home in an Esper control shell or a UB control shell. It’s a 5-turn clock, survives Push, dodges Abrade and Lightning Strike, and is just an overall great control creature. If you are a control player, this dude is great. 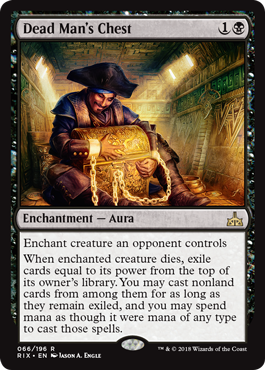 This is a great limited bomb because everyone is using creatures to win games. However in constructed games, I don’t think this will see much play. First of all, it needs your opponents to have creatures. Usually you will put this on high power creatures in order to hit something worth casting for free. However, you will also need a creature removal to cash in on Dead Man’s Chest and sometimes you won’t have both at the same time. Choosing to play this also eats up valuable space in your deck which is a toss up whether you want to play more removal or just play actual threats and don’t leave things to chance. I think this is not a great Magic card but it’s a flavorful one. 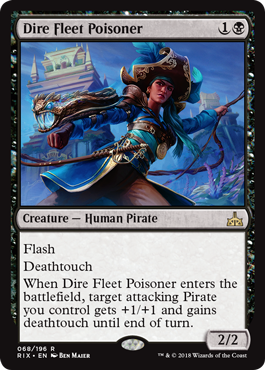 2 mana. 2/2. 2 keywords. 2 abilities upon entering the battlefield. Wow. What more can you ask for from a great Magic card? I think it’s a very versatile card that can make attacks even thanks to its +1/+1 and deathtouch, but it’s also a great surprise blocker that will trade for bigger creatures like Bristling Hydra or Torrential Gearhulks. I extremely like it and I won’t be surprised if this hits the $5-7 mark when Pirates become a viable tribe. Get it while its cheap! 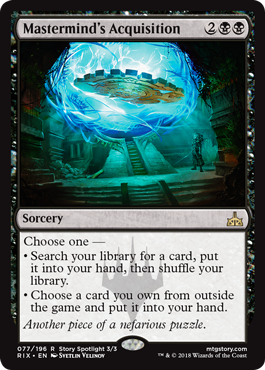 Wish is back and the timing couldn’t be better. Jon Finkel toyed with Dark Petition and Season’s Past to get to a top 8 finish thanks to finding key cards in your deck. Mastermind’s Acquisition does more than this because you can actually get cards from your sideboard and use it on game 1. The applications of this card is huge – you can pack your deck with all the answers and dive into your sideboard for your wincon once your opponent runs out of answers or threats. What comes to mind is looking for your Approach of the Second Suns from the sideboard and not find yourself drawing the 7-mana spell on any of your initial draws and opening hand. I really like this card, and I’m extremely happy it’s still very affordable on release. 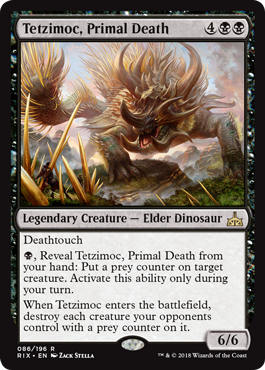 Tetzimoc gets my vote as the most bad ass Elder Dinosaur in the elder cycle. It trumps a lot of creatures in combat, and provides a very targeted, almost surgical-like precision, on who you should kill when you play it. It’s also a clever way of forcing the energy player to burn their energy reserve to protect their Bristling Hydra from getting a prey counter on it. It survives almost all the removal most decks play except for Vraska’s Contempt so it will stay in the battlefield for a few turns and get 6-18 damage in easy. I really love it, I think it will see standard play, and I suggest you guys get some while its still dirt cheap! 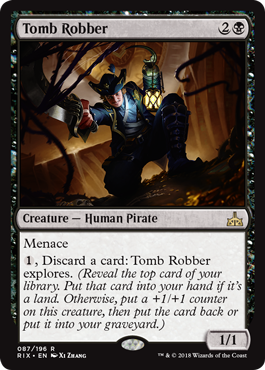 I can feel some reanimator vibe coming very soon with the printing of Journey to Eternity and Tomb Robber in RIX. I think Tomb Robber is an ‘OK’ card for reanimators because it fills up your graveyard with plenty of juicy things to reanimate. It also helps smooth your draws. On the late game, it can also become pretty big and thanks to Menace, it might present a decent clock in the right deck. I’m not overly impressed but I appreciate the value for having a discard engine that helps play with your top card in black. I think this card can replace Minister of Inquiries in the Esper GPG deck and allow it to go straight BW and use Mastermind’s Acquisition to find a Refurbish or GPG. 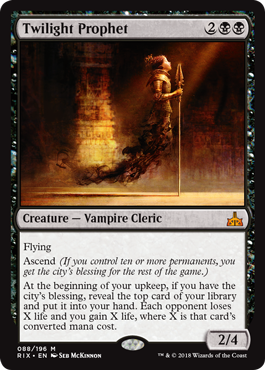 Dark Confidant just became bigger, bolder and badder for control decks thanks to Twilight Prophet. I spoke about cards not meant for the tribes they belong to like Champion of Dusk and this card fits that bill nicely as well. I like how this creature gives control players even more ways to get card advantage, deal damage for free, and gain life to stay alive. Most control players that plan to use Twilight Prophet might only get to Ascend by playing lands and Search for Azcanta but remember that Cast Out, Planeswalkers, Aether Meltdown are also permanents that count towards Ascend. Definitely this creature will not be played on turn 4, and more likely you will only cast this with counter magic back-up but still it’s a very powerful Magic card and I think some people will play 1-2 copies of this creature. It’s current price though is a bit of a gamble if you plan to invest on this Mythic. 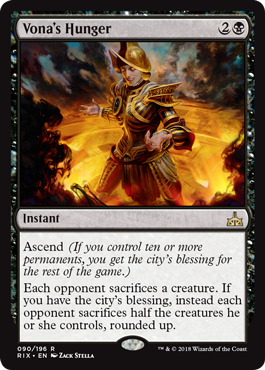 The last card for today is a tribute to Into the Slaughter from Shadows over Innistrad. Technically it’s an instant speed Edict effect which is great at dealing with hexproof creatures. Similar to Into the Slaughter that get better and hits Walkers if you have Delirium, Vona’s Hunger wipes half of your opponent’s creature if you have Ascend. Is it powerful? Hell yeah! Is it imbalanced? Maybe against a token deck. Do I need 20 copies and sell it once it gets to $20 mark? Maybe not.

Like most cards that give your opponents a choice – the choice is not always beneficial to you. Let’s say you are up against a Merfolk deck or a Dinosaur deck – they can choose to sacrifice the less powerful creatures then you’re still facing 5-7 body creatures presenting lethal. Against token decks this card is a bad top deck. Against energy decks, Whirler Virtuoso can choose to make 3-4 thopters and sac those and leave the Glorybringer, Servants and Cubs in the battlefield.

I think this can be a great card if paired with Primal Amulet because you can half the board, then half it again but that’s about it. At worst it’s a Carnage Tyrant killer if you can manage to wipe everything else clean off the table but I won’t be caught with my pants down shelling hundreds of dollars hoarding this card.

That’s it for now – we’re done with the mono-colored cards so our next stop are the artifacts then save the multicolored cards for last.