Hello again and welcome back to the Rare Review Series! Let’s now focus our attention to White and see what’s in store for Craig Wescoe fans!

Again, these are just speculations so don’t sue me for making you miss a hyped card while it’s cheap. 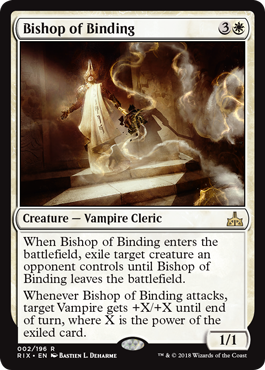 Bishop of Binding is literally a functional reprint of Fiend Hunter, Banisher Priest and the likes with an upside of using the exile creature’s power to pump another vampire. The problem is that you need to attack with it to get the power boost. Nothing feels worse than attacking with a 1/1 in a sea of 2/2s and 3/3s and later on, 5/5s and 12/12s. It’s also not that difficult to kill a 1/1 and release the creature from exile. I think some vampire lovers will push to play some copies of this card but the 4-drop slot looks reserved for Sanctum Seeker. 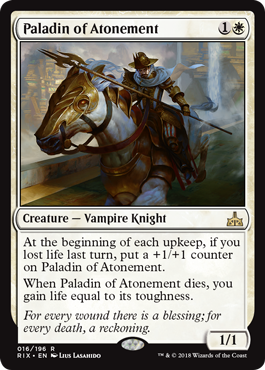 I spoke so much flak against 2-mana 1/1s but this card is actually not going to stay as a 1/1 for long. You need not take damage from combat to lose life. We have deserts like Shefet Dunes that allows us to lose life at will just by tapping it for mana. The upside too of this card is it will give you some of your life back when it dies. With Scarab Gods floating around, I doubt that BW vampires will splash blue for Scarab God and makes these seemingly weak 1/1s into 4/4s and  suddenly we have a solid late game strategy. 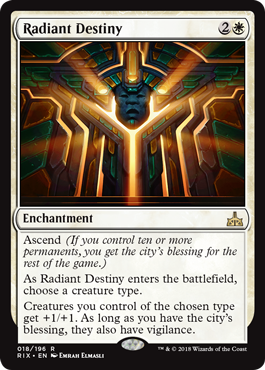 Tribal brewers will love this card because we all miss Always Watching, don’t we? The difference is that Radiant Destiny also buffs tokens. The problem though is that the current token shell has a mixture of different creature types:

For the vampire’s list, Mavren Fein, Dusk Apostle takes the 3-drop slot which curves better after a Metallic Mimic on turn 2. I would think this card might be better suited for Servo decks that uses Sram’s Expertise and Servo Exhibition and go wide and tall really fast. I would reserve my verdict for this card till Dominaria becomes standard legal – I speculate more tribes will join the fray when we go back to the land of soldiers, elves, goblins, zombies and homunculous (we already have merfolks in Ixalan). 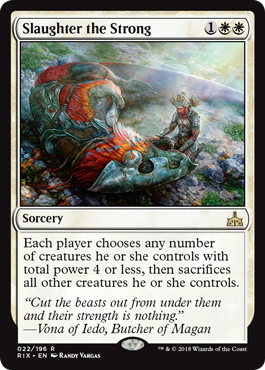 Slaughter the Strong looks extremely promising because against most decks, this will only leave 2 creatures at most on the opposite side of the board. The wording says “total power of 4 or less” so that leaves him with four 1/1s, two 2/2s, one 4/4 or a mix and he loses everything else. This is a great way to stabilize or catch up if you’re behind. I’m sure players will learn to work around this similarly on how they work around attacking into a Settle the Wreckage but nonetheless, a 3-mana sweeper is a welcome addition to control decks. If you are a control player, I suggest you order several copies. 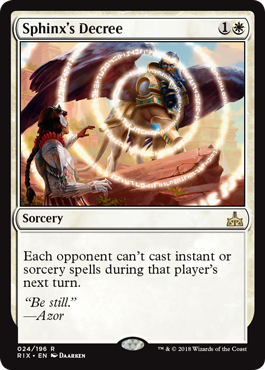 The only use I see for this card is to prevent your opponent from casting a sorcery-speed sweeper for an alpha strike next turn. It doesn’t help silence your opponent from countering your stuff which sucks, but it’s a great way to shut down Attune with Aether if you’re on the play and the opponent starts with a tap land and missed his turn 1 Attune. I would straight up play Negate than this, but I can be wrong. This card won’t be up in my charts for now I’m afraid. 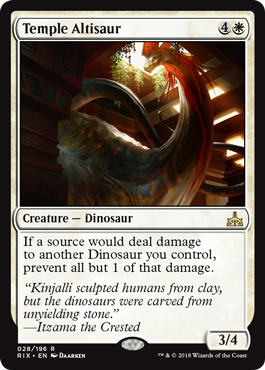 The word that makes this card bad is “another’. It’s great that it makes your creatures literally unkillable through damage and makes enrage more feasible BUT it doesn’t protect itself which is bad. This is definitely a limited bomb if you are building around Dinosaurs but I don’t think dinosaur tribal decks will play this creature over Regisaur Alpha or Trapjaw Tyrant. 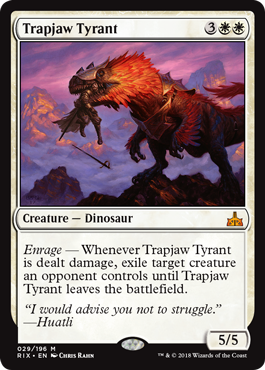 This card is awesome. First its a 5/5 body for 5 mana which is not a bad mana investment. Its ability though is pure juice! Imagine you have a Walking Ballista in play and you basically shoot this dinosaur for 1 and exile any creature your opponent has. You can repeat this as long as you have the mana available. Protecting it against removal is not that hard either thanks to its huge body, and dodges Fatal Push and even Reckless Rage. I am positive that dinosaur decks that play white will play 3 to 4 copies of Trapjaw Tyrant. 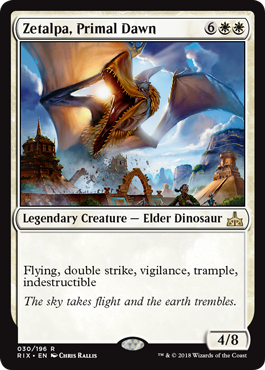 Dinokroma. Akromasaur. People have associated this with Akroma who has almost as much keywords on it as a creature can have. The difference is that this creature doesn’t have haste which is unfortunate. Though Zetalpa will surely stay in the battlefield long enough for it to attack but getting to 8 mana is not easy without playing green. I am looking at using this creature as a finisher for white-based control decks. I also see Zetalpa working well with Liliana, Death’s Majesty, reanimating it on turn 5 is borderline cheating. While writing this I suddenly realize that a RW dinosaur deck is actually becoming more and more viable and comparable to RG and WG builds – we have Kinjalli’s Caller and Otepec Huntmaster to bring the cost down to 6 and giving it will allow us to steal some games. Together with Sky Terror and Relentless Raptor and Huatli, Warrior Poet, Boros Dinos looks interesting enough to try at a local FNM.

That’s it for now – time to hit the gym and browse through the cards while I’m on that stupid treadmill. Stay tuned for our review on blue cards in my next article!