First of all, I didn’t quit playing Magic (no one really quits Magic for real) and I think Throne of Eldraine is a super sweet set that’s oozing with flavor, lore and childhood memories. I also think this is the most excited I’ve been for a new Magic set that’s not Ravnica, Return to Ravnica, and a Return to Return to Ravnica.

The standard format today is stale if I have to be honest and War of the Sparks didn’t shake anything up drastically. M20 did open up a lot of fantastic shells like Elementals and Planeswalker Tribal and have rejuvenated dying archetypes like Vampires and Mono-Blue by turning it into Simic Flash.

What I am most happy about the new sets is the fact that they printed cards that made one of my most favorite (I would say my 2nd most favorite archetype next to Land Destruction) which is Reanimator.

What I love about reanimator strategies is its ability to let us play creatures that don’t normally see play because they are either too expensive to cast fairly, and finding the right shell that glues all the moving pieces together to get to that big turn where you just take the game all in one swing.

And while we’re on the subject of cheating a big creature into play and taking the game in one fell swing, no one does it better than Drakuseth, Maw of Flames. This angry, flying, Fireblasting, Lightning Bolting, Incinerating, 7/7 monstrosity is just everything we want in a reanimation target. This creature is so amazing and I am honestly very interested to see the various shells that will get this into play sooner than turn 7.

There are great reanimator shells you’ll see online made by the greatest players and brewers and I tried all of them in Arena and I must say, they’re not called the best for no good reason. Martin Juza’s Grixis build offers great flexibility by playing Red to gain access to Lava Coil and Rix Maadi Reveler. Red mana also allows him to cast Drakuseth naturally which other decks don’t allow like Saffron Olive’s Sultai shell.

There are a bunch of other shells that you’ll come across that use all sorts of different bombs like Impervious Greatwurm, Vilis, Broker of Blood and Agent of Treachery, which is the next best Drakuseth replacement.

As a matter of fact, some Sultai shells actually rely on Agent of Treachery more and uses cards like Quasiduplicate to maximize its stealing ability, use Llanowar Elves and Paradise Druid to ramp into it as Plan B, and using Connive // Concoct instead of Bonds of Revival since haste isn’t as important if you’re not in a hurry to kill your opponent.

What I realized in the dozens of builds I came across was that the most successful shells ran some copies of Tamiyo, Collector of Tales. I would associate Tamiyo as the glue that pulls everything together, or the lube that keeps the gears of this deck consistent. Her passive ability to protect you from cards like Thought Erasure and Duress versus control decks is great on its own since we technically function as a control deck and we can’t really afford to get our hand stripped of our combo pieces early through midgame.  But her +1 ability is the reason the deck can run with relative less variance. She allows us to find our reanimator spell and mill our reanimator target at the same time. We would normally name Bonds of Revival from turns 4 through 5 if you get to play her on curve, and in those 8 cards that you sift through plus the 1 card you drew in between should possibly net you Drakuseth in the yard and Bonds in your hand.

What if you drew Drakuseth? How do you plan to get rid of it?

We’re not playing Chart a Course because it’s gonna leave us in a couple of weeks but we do have some alternatives and the best looter is back in creature form with nifty abilities. Tomebound Lich is by far my most favorite uncommon creature as of this writing. 3 mana for 3 toughness, with Deathtouch to trade with anything, Lifelink to keep us alive against aggressive decks (which is our worst match-up), and a loot effect on ETB (which is great if we kept a hand with Drakuseth) and a loot effect when it connects. It usually connects because your opponents won’t be keen on trading down their better creatures to kill a 1/3 dude. Radical Idea hasn’t seen much play since the dawn of Arclight Phoenix decks but I find it really helpful if we do decide to keep a 2-land hand.

As mentioned, we hate aggressive decks and though Tomebound Lich does an amazing job in keeping our life totals high, we need ways to interact while we build towards our end game.

Disfigure used to take Thought Erasure’s slot but I felt that playing Scry lands greatly reduced our ability to have an untapped black source on turn 1. Playing a shock land untapped and taking 2 damage to kill an early threat is just the same as getting hit by a 2/2 on turn 2 because you played a scry land tapped on turn 1. Thought Erasure also gives us vital information on what our opponent is playing and allows us to sequence our spells better for the most value.

Tyrant Scorn offers great utility and flexibility without taking 2 card slots. It kills almost everything in a vampire deck, mono-red and mono-blue decks. It can also work as a tempo card by bouncing anything (like a flying or reach creature) it can’t reach at your opponent’s end step so you can swing with a reanimated Drakuseth on your turn.

Ritual of Soot is a long-forgotten card which I believe is well-positioned in TOE standard. Like Tyrant’s Scorn, it hits almost all the vital creatures in Simic Flash, Mono-Red, Rakdos Aristocrats, Feather decks, and soon Knights from Throne of Eldraine. It’s definitely worth more than the $1 it fetches in the market. Grab yours today!

So how does my shell look like? Scroll down to find out.

Veil of Summer makes sure we can play our Bonds of Revival without fear of countermagic. I side this in against Esper, Dimir control decks and Simic Flash. While Negate is our straight answer to countermagic, and our only protection against Ashiok, Dream Render. I hate this card so much and apparently, any deck that can generate black or blue mana has 1 or 2 copies in sideboard. It is good against Scapeshift decks because it prevents them from searching lands but hopefully after Scapeshift rotates, people will play Ashiok less.

Against decks that try to kill us as fast as possible, we side in more removal and take out our Thought Erasures and Agent of Treacheries (no point stealing 1/1s and 2/2s). Enter the God-Eternals is heaven-sent for this kind of deck. It kills a big creature, it gains us some life, mills us to get the right cards in the bin, and leaves a 4/4 body that can soak even more damage buying us even more time. Resolving this and binning a Drakuseth and going back up to 6-7 life against an aggro deck with a 4/4 blocker is by far the best way to spend 5 mana.

Noxious Grasp hits a lot of powerful planeswalkers like Teferis, Nissa and Gideon. It also kills very large creatures like Ghalta, hard to kill creatures like Shifting Ceratops and Feather, or utility creatures like Risen Reef.

Assassin’s Trophy is our catch-up answer to artifacts, enchantments or any other permanents we can’t burn or steal in time.

To wrap this up, I am truly enjoying this shell so far and I’m hoping Throne of Eldraine offers some sweet creatures we can play with or more reanimator spells we can try. 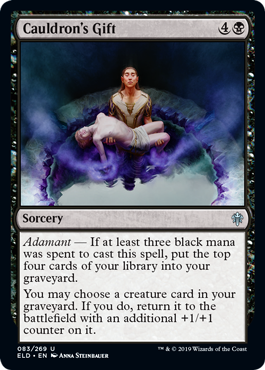 Cauldron’s Gift is something I’m toying with in conjunction with Agent of Treachery in an Esper Reanimator Control shell. Nothing compares to a 5/6 threat that can steal anything after you’ve countered or wrath away everything your opponent has played so far. Saving this build of later.

Did I say this deck is actually rotation proof? Till next time!