Hi everyone! Welcome back to the Lab!

I’m sure that when you read today’s article, you would probably know that we’re playing a lot of cards that say “Destroy target something”.

Now you’re probably asking, “what do you plan to destroy?”. The answer is simple: anything and everything!

The unicorn dream here is to lock the opponent out from playing decent magic. Either we strip their hands, blow up their lands, or deny the opponent of any resemblance of a board presence. And we do all these while having fun. Let’s go to the decklist first because I feel you’re super excited (like me)! 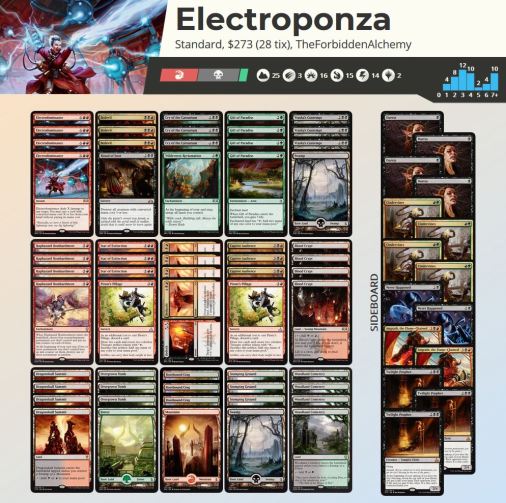 The deck is a mash-up of a lot of things: Control elements like removal, some card advantage, pay-off cards and win conditions. Let’s discuss the card choices so I can explain how we can achieve this “Burn the World to the ground” agenda.

The most boring but most important enabler in the deck is Gift of Paradise. It gains us the life we need to stay in the game longer against Mono U, Mono Red and Weenies, while ramping us to 5 mana on turn 4. Together with a single copy of Wilderness Reclamation, we can generate a lot of mana quickly for a huge Electrodominance (which can cheat something into play).

Reclamation is not a key component in the deck but if drawn and played early, allows the deck to really take off and play more things inside and outside our turns.

We don’t play creatures because we are focused at killing them. Bedeck is cheap, efficient, and works two jobs by killing shocklands, flipped Legion’s Landing and Azcanta, and checklands (which everyone plays more of than basics).

Contempt is another clean removal for Planwalkers particularly and Bedevil is that “across the board” silver bullet. Notable artifacts worth highlighting are Chromatic Lantern, Sorcerous Spyglass and The Immortal Sun.

If the opponent thinks he can go wide and overwhelm us, he better think again. Carnarium is my favorite card to draw against the Drakes deck, while Soot is my favorite card against the Weenies and Selesnya Tokens. Even if the opponent decides to ambush you with an end of turn March of the Multitudes and kill you with Flourish, you can also cast Electrodominance for 5 or 6, and play Soot or Cry at instant speed and blow our opponent out by surprise!

Speaking of Electrodominance, we’re now transitioning to the payout cards and Electrodominance is great at dealing huge damage to large creatures or to planeswalkers. It can also hit the player for a bunch don’t forget. It’s also a good surprise attack allowing us to cast Sorceries at instant speed. Like the example I shared above, casting Electrodominance with X equals 3 will deal 3 to something and allows you to cast Cry of the Carnarium to deal with a bunch of 2-toughness creatures and one 5-toughness creature thanks to Electdominance’s initial 3 damage.

We won’t be considered a Ponza deck if we can’t blow up our opponent’s lands. Haphazard Bombardment has been made notorious by Ali Altrazi in his RW prison deck and I think our deck calls for this kind of effect. Together with Star of Extinction and Bedazzle, we can really put our opponents on the ledge of having no lands to play their spells whilst blowing up literally everything but enchantments (Artifacts can be dealt with Bedevil).

Apart from Electrodominance, another win condition we have is Captive Audience. On an empty board, the opponent is given 3 agonizing turns to choose how he wants to die. Without the lands, he would be losing a full grip of cards. If he chooses to go down to 4, he’ll be in closer reach for Electrodominance. If he gives us 10 power worth of creatures, we can remove, then he has 2 turns to live.

To breakdown the spells, we arrive with the following (including overlaps)

Creature Removal: 25
Land Destruction: 11 (does not include the 3 extra triggers from Haphazard)
Lifegain: 7

What happens if we’re up against control? The sideboard is tailored for this specific match-up.

Firest, we pry their hands open and take out whatever they sided-in. We take out our creature removal and see what other juicy targets we can strip away. Never Happened is a weird card but I like that against Arclight and Nexus since it exiles the card. Goodbye forever!

Cindervines is another anti-control card which proved itself enough to make red players splash green to squeeze this in their sideboard.  If we manage to play 1-2 copies early, every time they cast Opt, Revitalize, Chemister’s Insight, Teferi, etc – they lose 2 life. This card also helps us remove enchantments like Ixalan’s Binding which compliments the limitation of Bedevil.

Another card that’s really good against Control players is Angrath. The +1 ability really puts a pressure on the opponent to draw and play the cards immediately or lose them. The -8 ability can sometimes be a win condition as well if we get that far up without losing him.

The flex spot in the sideboard is up for debate but for the sake of having another source of lifegain, I opted to use Twilight Prophet. It’s not mainstream but its stats is quite good if you look at how our deck operates. Reaching Ascend is not that hard if the game goes long and the additional draw is also good to keep us going. Since we’re playing a lot of high CMC cards, revealing a Bedeck // Bedazzale would deal 8, or Star of Extinction to deal 7 allows us to close out the game. Up to you really on what you want Twilight Prophet to be but for now, I think this is a good option to consider. I don’t have Twilight Prophet in MTGA so I might end up replacing him with something else myself in testing. I’m thinking Banefire.

That’s it for today and so far, I did a few casual games in MTGA without the mainboard and I’ve having tons of fun and laughs! Let’s see how it runs in Ranked.

See you soon and expect some gameplay videos to go up as well.