With Ravnica Allegiance spoiler season upon us, everyone is excited to see what’s in store for the current Standard meta once Azorious, Orzhov, Gruul, Simic and Rakdos join the fray. 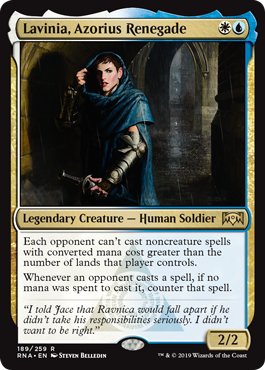 With this I’m anticipating more legends coming into the picture with Lavinia’s card getting spoiled early, I think a lot of power will come from the guild runners. If you watched the Ravnica Allegiance preview, we also see Rakdos himself atop the cult, leading the masquerade of death.

Looking back at the Abzan Historic deck I posted a while ago, I explored an aggressive configuration that can still use Urza’s Ruinous Blast to tip the scale in our favor by exiling all of our opponent’s defenses and use our Legendary creatures to kill our opponent. Even without Ravnica Allegiance, there are already a lot of high quality Legendary creatures across the curve that are widely used. I’m very excited to see what Gruul has to offer once the new set comes out, I’m sure it will offer cheap but strong creatures, pump spells and removal to make the deck even more potent.

The deck doesn’t go wide as fast as the Selesnya tokens deck but a turn one 1/1 life link is pretty good against any match-up to buffer our life totals and chip in some early damage. We don’t mind it dying but the potential of flipping it later gives us a continuous source of beaters.

Both of our two drops work good together. Emmara replaces herself if she’s contested in the red zone, but lets us go wide if unblocked. Shanna on the other hand celebrates the more creatures you have. Shanna is immune to Niv-Mizzet and Enchantment-based removal, chupacabra and planeswalker effects as well. She grows really big really fast and for 2 mana, it would be a massive return of investment already if she deals anywhere from 3-6 damage before dying.

Tajic is a great on-curve threat to swat for 3 more damage, pumping an Emmara or Shanna at times. Danitha looks weird in the list but a 3 mana 2/2 with 4 abilities is not something to scoff at. It can go toe-to-toe with Merfolk Branchwalker, Chupacabra, Plaguecrafter, non-Chainwhirler red creatures and many more. History of Benalia is another great 3-mana enchantment which churns out two 2/2 creatures across two turns. If Shanna lives, HoB helps her grow without additional mana investment as well.

Another peculiar addition is Blackblade Reforged. In theory, this equipment makes all our creatures a ‘must-answer’. Equipping this to Danitha on turn 4 against Mono Red is game over. Slapping this on Emmara ensures you a token and her survival most of the time. I really like putting this on Lyra or Aurelia too. Late in the game, leaving this behind makes your 1/1 vampire tokens from Adanto a massive beater! With very few artifact hate nowadays, I like having a win-con just lying around the field waiting for a token or top-decked Tajic and deal a butt load of damage out of nowhere.

Choosing white as the base color makes Aurelia relevant all the time. From pumping Shanna, Emmara, a vampire or knight token, Tajic, Shalai, Lyra and even Palladia-Mors, she offers a great power-up to your existing board and is a decent threat for 4 mana which survives Lava Coil.

Shalai is great at saving our real threats from hate, forcing our opponent to have 2 removal spells if he wants to get rid of another problematic threat. We don’t expect to use the 6-mana Gavony effect often but having green mana built into the mana base makes it easy for us to do so if needed.

After trading blows and going all out on the offensive in the early turns, our 5-drops help us gain back some life to win the race, or pummel the opponent to the ground with so much value. Forcing our opponent to burn through their removal spells early to deal with our high value creatures might spell trouble if they don’t have an answer to Lyra or Trostani. Having Shalai and Aurelia makes Lyra’s secondary ability relevant, take note.

Of all the possible 6-drop Legend, why Palladia-Mors? First, we essentially pay for every power and toughness she brings to the table which is an OK mana investment, stat-wise. She has evasion, can double duty as attacker and blocker, and damage penetration. She also has protection which is really great late game of the opponent plans to deal with her with sorcery removal.  Even if the opponent has drawn an instant removal on his turn, Palladia-Mors would already have his Linken Sphere refreshed so the opponent has to wait for her to deal damage before he can kill the elder dragon. With Shalai out, it’s twice as complicated getting ride of Nicol Bolas’ sister.

Similar to the principle I brought into the Abzan Historic deck, we’re building around URB so we can leverage a one-sided sweeper. Since all our permanents, except tokens, are Legendaries, we should not affected by this at all. If we resolve this with a couple of Legends out, we should be able to win the game in a couple of swings.

For the sideboard, we’re preparing for the Control match-ups that win with Niv-Mizzet, Teferi and Ral which are also not affected by URB.

Midrange and Control players will bring in more creature removal after game 1, seeing we’re an aggressive deck. By putting all four copies of Rekindling Phoenix we want to stretch their resources very thinly, refusing to give them any breathing room to resolve a Teferi or Niv Mizzet. If they are busy casting removal after removal, they should run low on cards and would occasionally take some damage to resolve a Chemsister’s Insight to replenish their hand.

Carnage Tyrant is also another anti-control card that does the same thing: Punish the opponent for relying on spot removal and counter spells.

With Gruul’s mechanic, Riot, getting spoiled today, I hope they print a decent 2-4 drop Legend that fashions the new mechanic. I would love another hasty creature or an under costed / high power threat.

To be honest, I’m not a fan of building linear decks that turn cards 90 degrees to win games but I really like this list. It’s a whopping $500 on paper but having a board state full of Legends and gold cards sure is pleasant to the eye.