Everyone who plays commander knows how strong Doran, The Siege Tower is. Essentially a 3-mana 5/5 that can deal a bunch of damage very quickly, very early in the game is an overall good aggressive strategy.

Consulate Skygate becomes an Air Elemental for 2-mana and Wall of Mist transform to a Colossapede once you get Arcades in the battlefield. You do have to take note that Arcades’ ability does not modify the power of these creatures and only affects how these creatures deal combat damage, which is now based on their toughness. Why is this important?

Because we play the craft Fugitive, Tetsuko Umezawa, which makes all our creatures unblockable except for Arcades. And because all our creatures have huge toughness points, we are well positioned in a very red and green deck dominated meta. Nothing in our board dies to Chainwhirler, Shock, Lightning Strike, Magma Spray, Essence Extraction, Yahenni’s Experise and the likes. We can sit behind these creatures until we get Arcades out and start hitting for 10 a turn.

Against spot removal, we have Dive Down and Blossoming Defense which not only protect our creatures but also makes them hit harder. Another great addition is Aegis of the Heavens which is potentially a kill spell if the opponent chooses not to block our 0/4 flier and suddenly he finds himself taking 11 damage thanks to Aegis. The minimal addition to power still allows us to go under Tetsuko’s unblockable ability. To help us win the race, I added Ornamental Courage to allow us to block and deprive our opponent a possible back swing.

As a blanket insurance policy, I want to have a couple of Shalai in the mainboard to protect us from Settle the Wreckage, as well as help protect Arcades. We can reserve our Blossoming Defenses and Dive Downs to her and essentially we can protect our entire board.

Golden Guardian does not really fit in the deck’s main flavor because it isn’t a cheap defender but I find it necessary to out grind the opponent after he sweeps the board. Golden Guardian used to be difficult to flip but thankfully we have a number of high toughness creatures that can survive after getting hit with it’s fight ability. Turning it into a land grants us access to a man-land (a land that creates creatures, duh) and a 4/4 every turn is nothing to sneeze about. 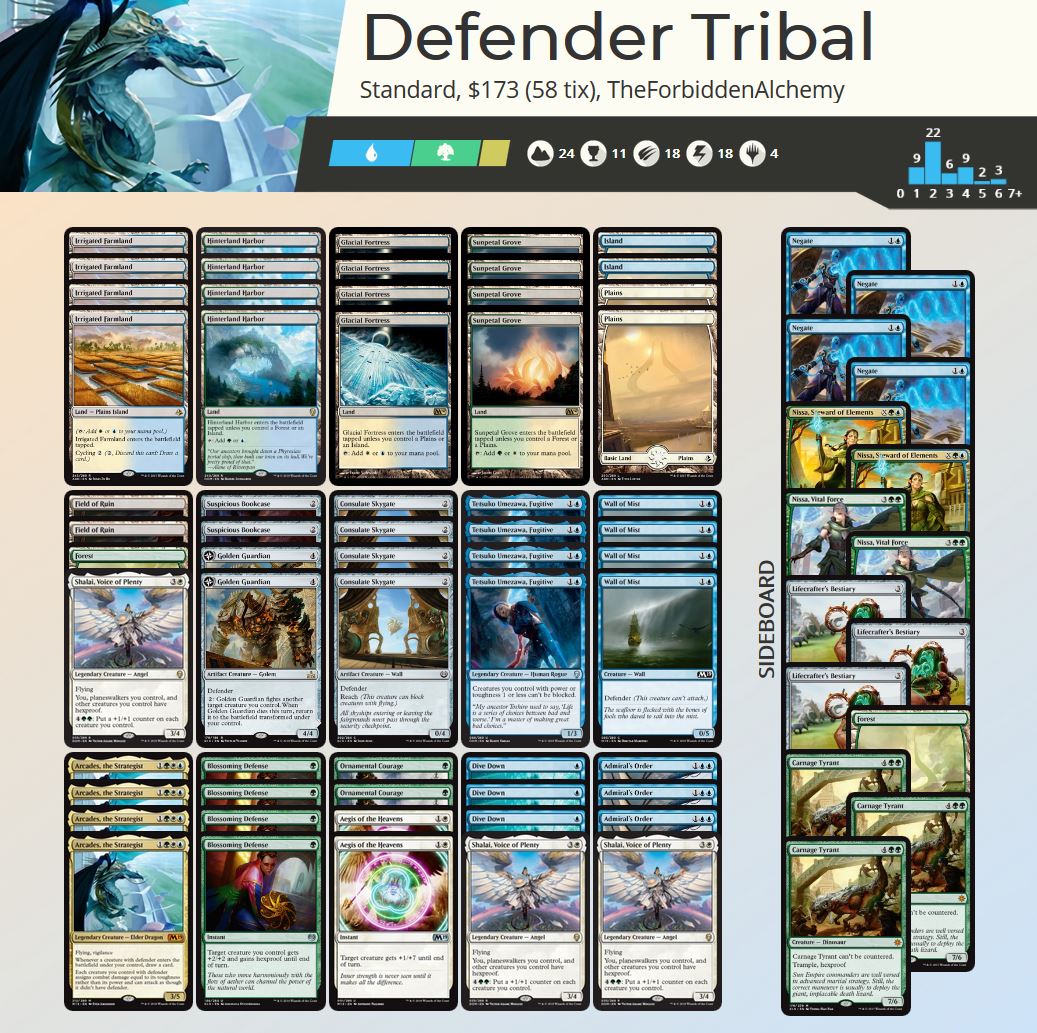 The sideboard is focused on beating the control match-up. Carnage Tyrant, Lifecrafter’s Bestiary and Planeswalkers help us go underneath the sweepers and removal. Negates come in for non-interactive win conditions like Approach and opposing Planeswalkers and sweepers. There is 1 Forest in the sideboard because the curve greatly increases when we side-in the walkers and the dinosaurs.

This is a funky deck that might raise a couple of eyebrows on your FNMs and is a great way to play around with the new Elder dragons from M19.