Since Rivals of Ixalan has been fully spoiled, like many Magic players, everyone is speculating what rares and mythics will see standard play and which of these are worth pre-ordering while prices are low.

The ‘Rare Review Series’ will hopefully be a regular segment here at The Forbidden Alchemy which will feature the new rares and mythics that will join the list of standard legal cards. I’ll share my takes on these card and my opinions if its worth the price on it as I write my entries.

First up is RED. Let’s take a look at the rares first then the mythics. 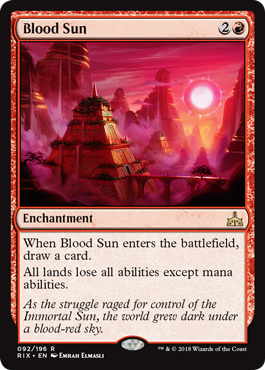 Blood Sun has been getting all the attention from EDH players more than Standard players because of its interaction with so many staple lands in EDH. It’s Standard implications are few as of this writing – it can shut down Ramunap Ruins and the other deserts, shuts down Azcanta, the Sunken Ruin and the other enchantment-flip lands. Apart from those, the new Rivals flip lands are also suppressed. I think this is mostly a sideboard card at best because there are better cards in standard that can deal with enchantments or with lands thanks to Naturalize and Field of Ruin. 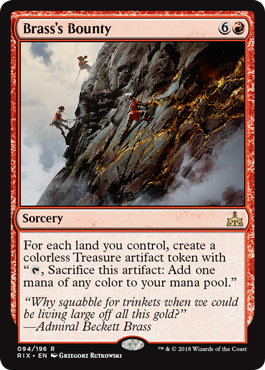 If you like ramp, Brass’s Bounty might make you shiver. It’s a card that can help you get Ascend instantly which is nice. But if you can get to 7 mana in Red and still be alive, you don’t need 14 lands to do something you’re not yet already doing. I can see this card cheated into play faster with early pirates that make treasure tokens play Inspiring Statuary and use the tokens to cast this with Improvise. Perhaps Revel in Riches might see some jank wins as well. It’s cheap so no harm in buying and tinkering with it. 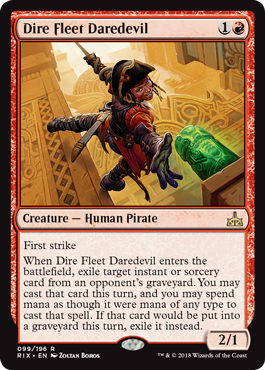 People have called this the Snapcaster Mage of Standard. This might actually be useful against spell-heavy decks if you plan to use your opponent’s spells against them. In today’s meta, most of the spells are limited to wrath effects, spot removal, and Attune with Aether. Nothing really juicy gets in the graveyard that red players want to recast. It could have been better if you can also exile stuff from your own graveyard but limiting it to your opponent’s yard makes this card weaker. Don’t get me wrong, a 2-mana 2/1 first strike is not bad in stats and the ability makes him your above average threat – we need to wait if the meta will start playing spells worth stealing. 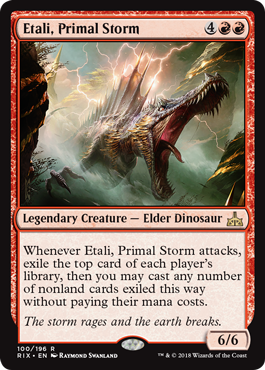 Etali has the best art because I love finned raptors! I think pound of pound, Combutible Gearhulk is better than this card because of First Strike which is super relevant when we’re facing Bristling Hydras and oversized Longtusk Cubs. The Gearhulk also does something the turn it enters the battlefield which is unfortunate for Etali. You might not even get a change to swing with Cast Out, Unlicensed Disintegration, Chandra’s Defeat, Walk the Plank and many others seeing more and more standard play. This is great in EDH but sadly, not so much in Standard. If you do invest in a dinosaur deck that runs Otepec Huntmaster to cheat this guy on turn 5 and swing in the same turn – you need to make sure you draw Etali and have Otepec survive. 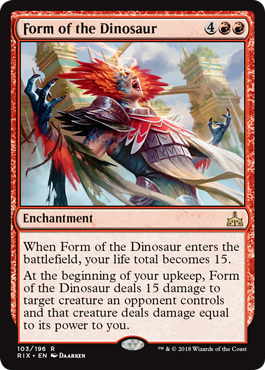 I like the flavor of this card very much. What I don’t like is that it lost the clause from Form of the Dragon that resets your life back at the end of each turn. This can be quite useful if your low on life and it brings you back to a healthy 15 – however its ability is a must. You have no option not to deal the 15 damage to save you some life. To circumvent this, playing Gideon of the Trials and nerfing the creature will save you the swing back since Gideon protects you from damage from a given source. The other bad thing about this is that it cost 6. There are so many spells better than this on the 6th drop slot so I think this is a limited bomb and a gem in EDH decks but it won’t see standard play anytime soon. I hope I’m wrong. 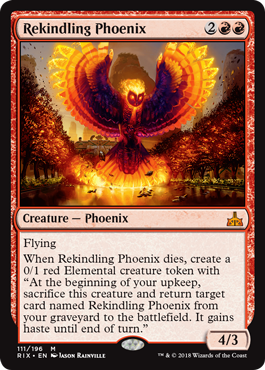 Phoenix-like creatures have often been reprinted in days of old and they always have ‘return to the battlefield’ clause to satisfy the card’s flavor. This card however is unlike any other phoenix printed because it leaves behind a 0/1 that needs to survive in order to bring it back. If we compare this to its predecessors, some just requires you to pay certain amount of red mana to bring them back. Some require you to deal noncombat damage and the bird comes back to life, or have metalcraft or trigger raid. Though this version is reasonable costed at 4 mana for a 4/3 flier which is great, the condition to get it back is fragile. The upside is that you need to invest 2 spot removals to permanently get rid of Rekindling Phoenix. I still think this will see standard play. i won’t pre-order this at $16. 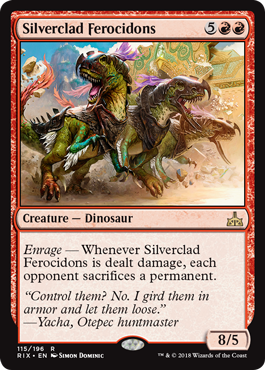 The enrage mechanic is getting huge support in Rivals especially now they printed Reckless Rage which is, in my opinion, the best costed removal in standard moving forward. And what better creature to hit it with than Silverclad Ferocidons. An 8/5 body is super difficult to get rid of and it has a pseudo-Annihilator if it gets blocked. Don’t get overly excited though because it costs 7 mana. Again, another EDH monstrosity people who plan a dino-deck will enjoy using. 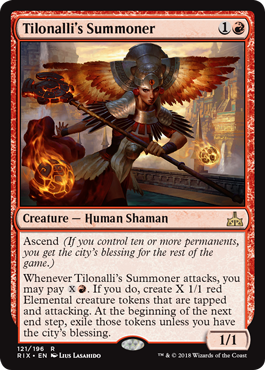 This card shows the most promise in the right deck. This card can go extremely wide, extremely fast in the right deck and unfortunately it’s not in the right color in achieving Ascend quickly. This creature might be splashed in token decks and Anointed Procession can make Tilonalli’s Summoner usable to some extent. Another way to get Ascend naturally in red is with treasures but I’m afraid it might be too slow.

That’s it for now – I think Red is not getting any love in the rare and mythic department but if you look at the uncommons and commons, they do provide the missing pieces to make half-baked archetypes playable now. 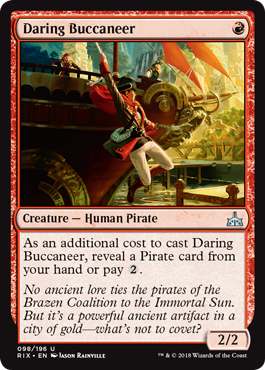 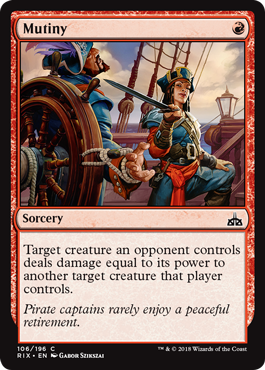 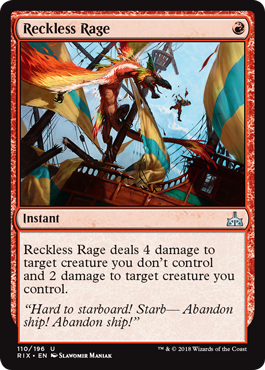 Daring Buccaneer is a great addition to an aggressive pirate tribal and for sure, every red player misses Falkenrath Gorger.

Mutiny is a cheap way to make a Servant of the Conduit kill a Longtusk Cub. Some interaction is also worth mentioning that a deathtouch creature like Gonti can kill a larger creature and both Gonti and the big dude die at the same time. Look out for those synergy when you play this card.

I already mentioned Reckless Rage and I think this is the best red card in Rivals. The ability to kill a Glorybringer for 1 mana is super sweet even if you take down someone from your side. If you fancy building an enrage deck then this card suddenly went from good to great with Ripjaw Raptor being the one of the best targets.