I hope your nights are lit with mizzium mortars tonight!

As we close the last page of 2017, let me first greet everyone a Happy New Year. I hope this year was good to you, both in your personal lives as well as your planeswalking career. Let us welcome 2018 with better lines of play, better mulligans, and with festive board states more cluttered than a tokens deck.

Oh, and better health, career, love life, and other important stuff too.

Around this time of year is also when new year’s resolutions are written down, get tucked inside your wallet or pinned in your closet door and get forgotten by Valentine’s Day. Did you ever have a Magic-related new year’s resolution? Will you be having one this year? Let me share with you some of mine. 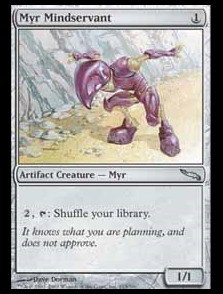 I will never riffle shuffle my deck.

Did you ever say this to yourself whenever you sleeve up your deck in new sleeves? When you relish the smooth velvety feel of those matte sleeves sliding through your fingers and hear that familiar sound of gloss and matte finishes rubbing against each other – did you ever tell yourself you will keep them that way as long as you can and advocate pile and squeeze shuffling for the rest of your life?

Yes? Then you must have forgotten this resolution the moment you lost a game because of a misplay or a wrong calculation of damage and missed the prize bracket of your local FNM or large tournament. The moment you slapped in your sideboard and riffled away your deck, pinched your cards at every draw step, hand-shuffled your cards while waiting for your opponent to end his turn – you knew this was the end of this resolution.

There is no coming back from your first riffle, never. Once those bent corners appear and your opponent cuts your deck like garlic, you have lost.

I tried playing with outer sleeves to help me keep my resolution safe but to no avail, once you spend 3 hours un-sleeving and re-sleeving your deck because you had another idea for a sweet brew, you wished those who invented outer sleeves to go to hell. 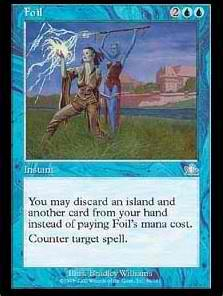 I will build an all foil deck this year.

I once had this dream of foiling my entire EDH deck. My commander at the time was Zedruu. It was a joyful journey of looking for cheap foils like signets, mana rocks, basic lands, and bargain dual lands. Then you realize that some of your foil commons are worth a kidney and half a lung. Can you imagine yourself buying a Mercadian Masques Brainstorm for a fun EDH deck? Nope. $226 worth of NOPE!

I was very happy that a lot of cards with no foil versions got reprinted in foiled formats but there are just some cards you have to stop paying rent or electricity to afford them.

Going back to my Zedruu deck, I failed to foil it 100%. I did manage to convince myself to buy a foil Greater Auramancy, Counter Spell, and Path to Exile – but I stopped when I started to look at all the other non-rare foils I still needed like Swords to Plowshares, Daze, Brainstorm, Lightning Bolt and so on. Eventually I toned my deck’s power down to avoid buying the better versions of cards I needed but still, I was only able to foil my deck to around 70%.

The other thing worse than not being able to foil the entire deck, is to get foil chaffs that don’t fit in any other deck, or stands out from an otherwise non-foil deck. I hate it, I hate it, I hate it! So now I’m stuck with weird foil cards like Form of the Dragon, Donate, Shifting Loyalties, Swithcheroo and such. 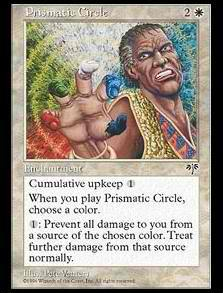 I will stick to one color of sleeves.

Whether it’s for practicality or for uniformity, we all might have experienced telling ourselves its time to invest in one colored sleeves so you can mix and match your cards without problems, or move them around different decks with ease.

But for some reason, sleeve manufacturers like Ultrapro, KMC and Dragon Sleeves keep on introducing new colors that come from the same color pie and call it with different names, and suddenly we turn into girls who can differentiate green from mint, turquoise, lime, apple and petrol (how the f*ck is petrol a color).

When I first discovered Dragon Sleeves, I bought my first box and chose the color Red. There were no Crimson, Magenta or Amber back then. I was into EDH then so I tend to use the entire box of around 103-104 pieces including the commander and some tokens. When I built my next EDH deck, I purchase another box of Red and patted myself at the back for doing a good job at keeping my resolution. What screwed me over was when I built my third EDH deck and the store ran out of Red and offered Blue or Green instead. I had the choice to wait for stocks to arrive, or go find another store, defer my deck building, un-sleeve my old decks, or buy whatever was in stock and just change it later.

Yup, I went for the last option and today, I still have left over blues, purples, whites, yellows and greens. I recently bought 2 turquoise boxes and 3 petrol boxes to at least narrow down my colors and texture depending on the decks and format I play – turquoise glossy for EDH because they are not as thick and can fit in my deck boxes, petrol matte for standard because they are more durable and shuffles better. I was trying to revive this resolution then an office mate gave me a Purple matte box for Christmas so I gave up entirely after that.

I’m sticking to Jund (or whatever color combination).

Have you ever felt the urge to trim down your colors because it was unrealistic from a financial point of view to always have all the staples in every color but couldn’t play them all? I was and still am in this situation right now so I decided to start early November this year to focus on just 3 colors – Jund – for standard. I felt that it was the right color for me because I am impatient and impulsive which makes Blue my weakest color preference.

I also don’t like White so much because it’s a creature-sweeper color which is too aggressive or controllish for me. You see, I like playing interactive mid-range decks so I felt Jund colors were the best fit.

When Ixalan was released, I immediately ordered cards in these colors – primarily the dinosaurs like Regisaur Alpha and Carnage Tyrant. Lucky that I also invested in Hazorets, Rhonases and Glorybringers from Amonkhet, it seems like a great pool to build on.

My resolution once again went down the drain when I flipped over a binder and this guy was selling his playset of Fraying Sanity for roughly $4 or around Php200. I always wanted to play with this card back when Startled Awake was still legal in standard but wasn’t able to get the cards in time. So I said to myself, it’s $4 and it might be useful in other formats like Modern (I wanted a mill deck in modern), why not buy it?

That purchase led me to buying a playset of Glacial Fortress, Settle the Wreckage, Irrigated Farmlands and built myself a UW Embalm Sanity deck. So much for sticking to Jund and the first thing I built was an Azorious deck – from the opposite side of the color pie! If I can table flip I would, but the deck did gave me a top 8 PPTQ finish so it was my silver lining.

Anyone buying a playset of Fraying Sanity?

I will play less and do other more important things like growing up.

This might apply more to the working class or those trying to become responsible adults. Magic is not a cheap hobby. We start with this game because we happen to have some spare cash and we enter the game with mediocre decks that doesn’t cost much. However as we go deeper into the game and become more competitive, we don’t realize how much money and time we spend into this game. Suddenly we are shelling out 50-60% of our paycheck buying cards, accessories and joining tournaments, and we start spending entire weekends locked inside local game stores grinding.

I once said that I will cut down on my playing time and focus on adulting (don’t condemn me grammar nazis if this isn’t a word). I invested more of my time at work, at home, with friends and thankfully found my ex-girlfriend who is now my fiance.

I’m sure you’re looking for a twist where this resolution went sour, aren’t you? This was the same time my fiance supported my me-time and allowed me to play Magic on weekdays and sometimes on weekends if we don’t have plans. She would not call me, nag me, bug me while I played and would even wish me luck. This was the turning point where I told my girlfriend that I wish she doesn’t change and would still allow me to play Magic even after marriage. She didn’t say ‘no’ so like in Magic, if my spell resolves, it’s good

So I say – Screw this resolution! It’s not about playing less – it’s about playing responsibly. Who said liquor ads weren’t educational.

I will quit Magic.

The grand daddy of all Magic resolution – quitting the game. Did you ever quit the game because of some stupid reason? Like college? Marriage? Or perhaps something really serious like you needed funds to pay for medical bills or home renovations.

Magic is more than just a game. It’s something you enjoy doing which you can never unlearn. You may go rusty from years of not playing or you get left behind after missing 2 or 3 blocks. Magic is also about the gathering. The people you meet while playing become more than just opponents across the table, they become friends. I have met great people playing this time who have at some point helped me get through life’s toughest times. The game also offered refuge from problems. It also serves as a beacon for long-time friends to come together.

That is why Magic players never truly quit. They may go silent but once life is good, budget isn’t tight, and time is plenty – Magic players flock back to the game they love so much. Even retired professionals still attribute most of their current success to the game. They might not play themselves but their kids sure do.

I will teach my kid to play the game and reward him with packs when he gets high scores in the exams. If I end up with a daughter, she will be named Liliana.

That’s it for today – go and spend time with your family! I hope you have a great new year’s celebration with good friends, great food and awesome holiday drafts!

Cheers and see you next year!