I bet you’d agree when I say that Panharmonicon is an awesome card after you untap with it. It boosts the effectiveness of creatures and artifacts hitting the battlefield without adding anything to the cost, giving us more value for our mana.

Particularly with ETB triggers that affect the board state like destroying something, gaining life, making the opponent discard cards, retrieving something from the graveyard and many others are awesome with Panharmonicon.

I made a recent deck using Panharmonicon and the Explore mechanic from Ixalan here and it has roused the interest of many people. It was a cute deck list so I wanted to do something more aggressive and monstrous and what can be more aggressive and bigger than Dinosaurs.

A lot of dinosaurs actually have neat ETB triggers that’s worth doubling with Panharmonicon. I borrowed this concept from popular RG Dino decklists online that utilized Samut, the Tested to give a huge dinosaur double strike and deal a butt load of damage in one swing.

But at turn 4, there’s not much dinosaur that’s big enough to benefit from her +1 ability. I will replace her with Panharmonicon on the same slot because we will try to build this deck around ETB triggers which I think is a more stable, less random approach, and less susceptible to removal.

Rishkar gets to distribute 4 counters, Sand Strangler can deal 3 damage to two blockers or 6 damage to one, while Verdurous Gearhulk sets up for a massive swing thanks to eight +1/+1 counters.

I’m actually very excited to see how this deck will perform, hopefully better than the RG Dinos that have a hard time showing up in top 8s. Here’s my RG Dino-Panharmonicon Deck!

A nut sequence would be: Turn #

The mainboard has all the best characteristics RG can provide: 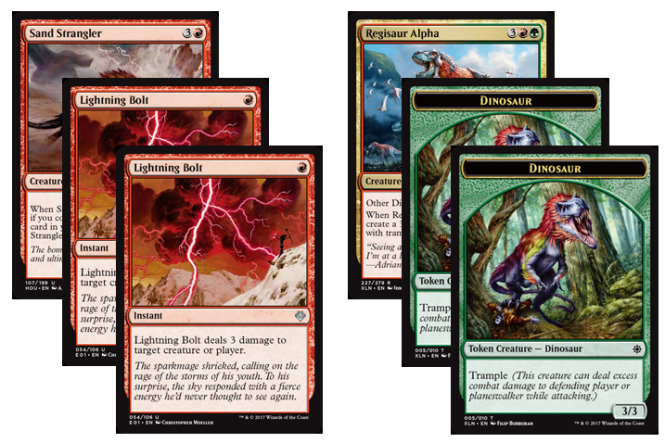 The sideboard also capitalizes having Panharmonicon out in the field! I seriously would never remove all 4 copies of Panharmonicon even if it’s not so useful against the opponent’s deck. Leaving 1-2 copies still raises the power of this deck exponentially.

With the emergence of token decks fueled by Hidden Stockpile, Annointed Procession and Vraska, Relic Seeker, Rampaging Ferocidon should punish them for generating so much tokens. With Panharmonicon, they will take 2 damage per token instead of 1. This also stops Approach decks from getting back into the game after taking hits.

Chandra comes in against high-removal decks. She allows us to get some card advantage, takes out removal, and occasionally help us ramp to 7 mana by turn 5. Nissa, Vital Force is the only way for us to get back permanents that have been destroyed. Her +1 ability is also a good clock after the opponent casts a Fumigate, and her emblem is pure card advantage which we desperately need against attrition decks.

A one-off, Skysovereign is a great card we can splash to deal with planeswalkers. It’s also a way for us to get damage through against a cluttered board. Our 3/3 dinosaur tokens or Deathgorge Scavenger can effectively crew this if they can’t swing themselves against bigger blockers.

Now this is one spicy tech card. In my experience playing against Approach decks, they would tap out on turn 7 to cast Approach of the Second Sun to gain back some life and take the game over by stalling, sweeping, and filtering the next 7 cards. But what if you can deny them an untap step, deal back the 7 life they gained, and deal enough damage to knock them out?

Glorious End is basically our ‘take an extra turn’ card and hope we can deal enough damage to close the game. If he taps out to cast Approach after taking a huge hit, we can cast Glorious End on his upkeep to deprive him of his draw and ends the turn. On our extra turn, we swing with everything hoping to deal enough damage to win the game before we lose at the beginning of our end step. Very risky, but it’s a very valid way to win whilst keeping you and your opponent at the edge of your seats!

I hope you liked my take on RG Dinosaurs. I am confident it’s very fun to play, tons of fun when you get to pull the Panharmonicon synergy, and hope you enjoy playing this at your next FNM!