From my last Mill article I found that out that running a straight up UW mill deck in a sea of Izzet Drakes and Mono-U Aggro in MTG Arena (and in latest standard tournaments in http://www.mtgtop8.com) is a very, very bad idea.

Dumping cards into my opponent’s graveyard only made these bad boys stronger. I found myself facing 13 power drakes thanks to my multiple milling effects and I’m usually dead before I get to Cleansing Nova mana.

Also against Mono-U, their cheap counter magic foils my chances of getting a Settle the Wreckage through and with Curious Obsession and multiple 1-drops, I am very low on life by the time my sweepers are online and surely they would have drawn additional counter magic by then.

I’m not even going to defend keeping Teferi in the deck because he’s always late to arrive, and seems like I’m already dead or already winning.

So what did I learn and do to my initial deck list? I took out all the White and replaced it with Black. Seal Away had zero value against the Boros and White Weenie decks that churn out vigilant knights! What I wanted Seal Away to be was Cast Down instead during my rounds in MTGA. Being able to remove the knight token after my opponent casts History is better than passing the turn not playing my enchantments just to have mana to seal away the token (if ever it tapped) the next turn. It is however good against tapping attackers regardless of size or if its legendary.

Ritual of Soot was a refreshing alternative to Settle because it kills 90% of the Boros and White Weenie decks except for Venerated Loxodon and the occasional Aurelia. For Mono-Red, it kills everything except Rekindling Phoenix. Against Mono-U, it killed everything IF it resolves. What it doesn’t kill in Standard are dinosaurs, midrange creatures like Crackling Drake, Doom Whisperer, Carnage Tyrant and many other things that kill me very fast.

To increase my chances of survival in a meta full of low-to-the-ground creatures, I needed a cheap sweeper so I decided to use Golden Demise. At first, I underestimated the -2/-2 effect because it couldn’t kill anything 3 toughness like a lucky Jadelight or a Chainwhirler but apparently it saves me a bunch of life from Benalia tokens, merfolks, vampires, goblins, soldiers, and elves. I really liked the amount of things it can kill early in the game but drawing it late feels dumb.

During my first run in Arena, the UB build seemed better in aggressive match-ups but sucked if I played against big-creature decks. Funny enough I lost to a RG Legends deck that had all sorts of Dragons from M19 which I couldn’t cast down, won’t die to Ritual of Soot, or wither away from Golden Demise. It was also bad against resilient decks like BG who can ‘Find’ their creatures and bring them back.

My realization was that I needed ways to live long enough at the start of the game, have answers when I begin to stabilize, then have a panic button if Carnage Tyrant becomes too popular (which it already is) or when things go out of hand.

I found out that going Esper was the answer. I know the mana base is clunky as F* without Godless Shrines and Hallowed Fountain but the colors gave me the collective answers to win my battles more consistently. Since my UW mill shell had tons of card draw, my only concern was to hit Blue mana in my opening hand, then draw into black early, then naturally draw white mid-game. With all the cantrips this should work out based on statistics if I put enough of each color into the mana base.

I can’t run more Field of Ruins because the mana base is bad as it is, but I still want at least 1 way to fix my mana if needed or blow up a flipped Azcanta or Legion’s Landing. The Evolving Wilds don’t feel slow because the deck is pretty slow to begin with.

Despite overhauling the deck, the mill and cantrip package remains unchanged. I think these slots are the core of the deck’s game plan and diluting this just makes the deck less consistent. I still didn’t use Patient Rebuilding because it doesn’t do anything the turn it enters the battlefield and apparently mills the least cards each turn.

I can only squeeze in 3 spot removal after wiggling enough room to fit all the cards, with a 2-1 split between Cast Down and Moment of Craving. I needed at least 1 card to get my life back up because I found out that I lost many games because I was 1 or 2 life short of taking the hit and survive to mill my opponent out on my next turn. Another copy of Moment of Craving is on the side for hyper aggressive decks like Mono Red and Mono Blue, and a third versatile copy which I will explain later.

I discussed the choices of my sweepers and I want access to them from turn 3 onwards. From selective, to situational, to all encompassing, I think the mix of these sweepers allowed for better threat coverage against an unknown opponent.

Many of our removal cards are not complete play sets but there were situations that I wanted a third Cast Down or a fourth Cleansing Nova. Splashing in a 1-off Mission Briefing gave me a play sequence of recasting a Cast Down or Cleansing Nova after using them all up. It has also dug me more card draw spells after recyling a Chart a Course which made me draw the cards I put on top of my deck. Sweet interaction right there I must say. 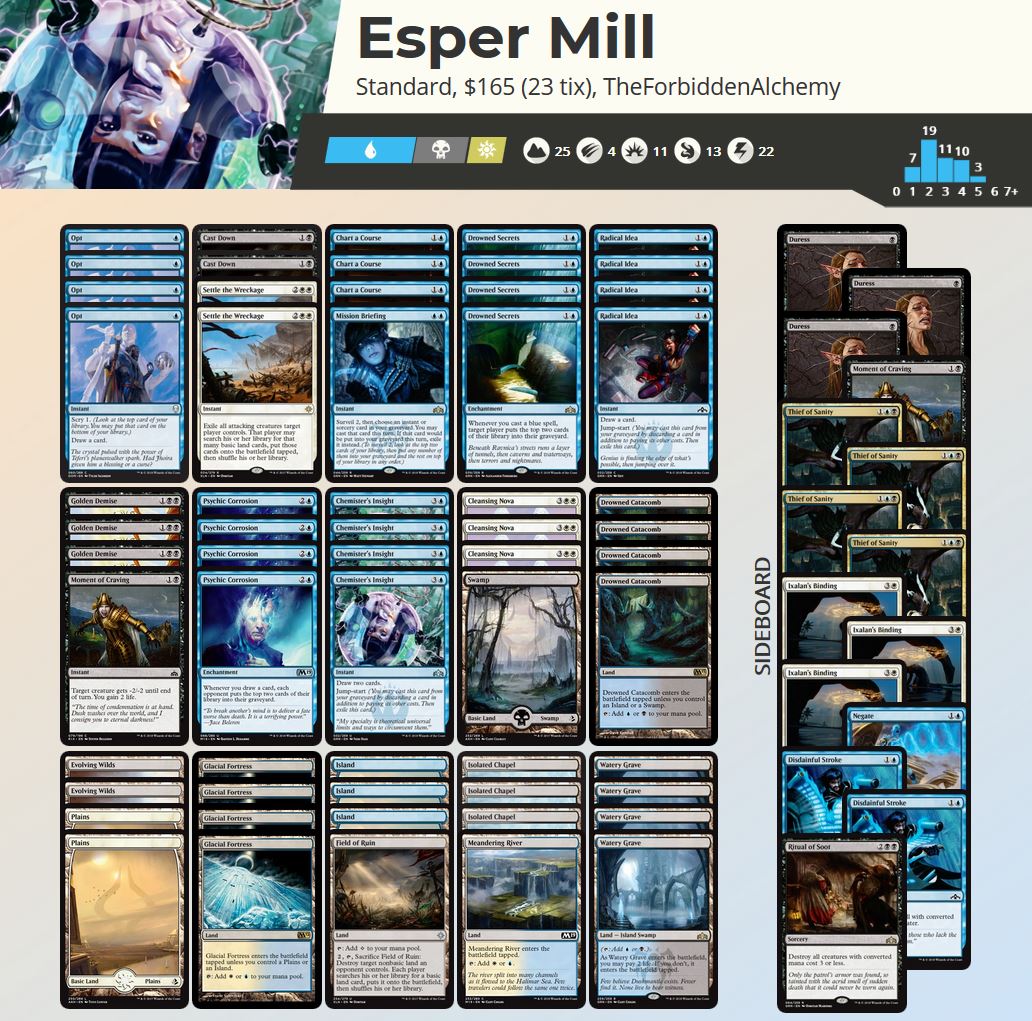 Going Esper also reduced the price tag of the entire deck from $380 down to $165 thanks to losing all 3 copies of Teferi, Hero of Dominaria which are going for $50 each but didn’t meet the expectation I had for it.

The sideboard is also more versatile now thanks to having access to 3 colors. For black, we got 3 Duress, 1 Ritual of Soot and 1 Moment of Craving backing us up against control match-ups and additional support against very fast aggro decks in the format.

For white, we have 3 copies of Ixalan’s Binding which is stellar if you can sit this down on a Conclave Tribunal against mono white or Boros aggro because all their remaining copies get stuck in their hand, saving your enchantment from removal for good. It also acts as our Vraska’s Contempt against Vivien Reid who is my least favorite Walker to see across the table.

What I’m trying out is Thief of Sanity off the sideboard. Since our opponent knows we’re not running any creatures in game 1, they will side out all their removal which lets our Thief carve our opponent’s deck safely. The damage isn’t really going to win the game for us but milling 3 cards deep and allowing us to start playing with our opponent’s deck is a sweet deal for 3 mana.