I thought I can manage one more entry today while waiting for the plane to arrive, besides I won’t have another opportunity to write until I get back to the Philippines around midnight.

My favorite creature artwork for Dominaria is that of Adeliz, the Cinderwind. Good thing she’s more than just beauty but she’s also quite powerful in a wizard shell. She can be considered a Lord if you can sling some spells and buff your entire board. Outside Dominaria you will find creatures that are actually Wizards but you just didn’t notice that minor detail until now.

Each of the blocks that are still standard legal have solid wizards that can build this tribal shell together with Dominaria’s own wizards.

Apart from casting spells and pumping the board with Adeliz, we have Naban that doubles the ETB effects of our wizards and we have some very powerful triggers worth doubling. Silvergil Adept will draw us 2 cards instead of 1, Ghitu Journeymage will shock our opponent twice, and Merfolk Trickster will tap down 2 potential attacks or blockers and brick their abilities (no tokens for Rekindling, no reanimation for Scarab, no indestructible for Hazoret). Watertrap Weaver together with Naban essentially taps down 2 creatures for 2 combat steps which is awesome! 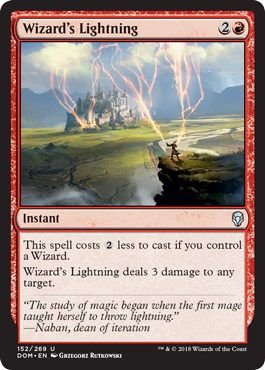 Dominaria also rewards us for playing Wizards by giving us a Lightning Bolt and a Counter Spell. This goes really well with Lightning Strike and Negates that we will also build into the deck.

Here’s my first rendition of UR Wizard Merfolk featuring Dominaria.

On the sideboard we have a heavy counter suite that convers the deck from Aggro to Tempo.

Baral, Chief of Compliance is good at what he does – make our spells cheaper allowing us to interact faster. Negates come in against noncreature decks like Approach, UB Control and those that pack a lot of Planeswalkers. Reduce is essentially a Mana Leak with Baral out, but the other half is what caught my attention. Rubble is a sneaky way of time walking the opponent the next time he taps out. With enough wizards in the play and the opponent short of mana to cast their sweepers or deploy enough blockers might be enough to steal a win.

A couple of Magma Spray and an Abrade from the side helps us improve our match up against very aggressive decks like mono Red, BR Aggro or when we are on the draw against Vampires and UG Fish. You can interchange the quantities around depending how heavy your meta is on GPG and Vehicles.

Lastly we have Chandra, Torch of Defiance which gives us inevitability against slower set-up decks that also makes us play a slower more careful game. She nets us some free damage, produces mana to keep our lands untap for interactions, and her ultimate is a win con by itself.

I’m sure there is a more streamlined version of this deck but I’m about to be left behind by my plane so I’ll check back on your comments and see you soon!