Before I fly to Singapore and get busy with real life adult stuff, I’d like to share with you a pet deck of mine since I last posted what I would do with this card right here.

Aid from the Cowl is the type of card that Johnny brewers like myself love to break. Yes it won’t be the next Protour breakout card but it can be the next FNM dominating card in your local store. At $0.50 each, I don’t think toying around this card will break your wallets.

The question now is what do we bring out for free in today’s standard meta? What are high cost permanents that are back-breaking if they hit play before its intended curve? Look at the art and you can see a stampede of mammoth-like creatures fighting with the armored rebel. Looks familiar? 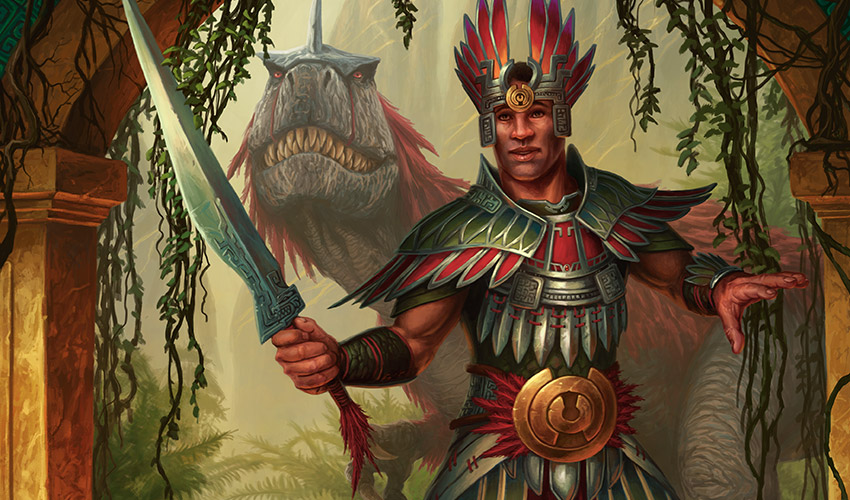 This time that armored soldier wears bad-ass tribal gears calling our not mammoths but huge mammoth-eating Dinosaurs! Yes, thanks to Rivals of Ixalan, we have a ton of Dinosaurs to choose starting with Huatli’s very own pet, Zacama and Ixalan’s Dino Avatars.

Zacama is like a dinosaur Planeswalker. It can kill creatures, kill noncreatures, and pops you 3 life for 3 mana. It attacks as good as it blocks thanks to Vigilance and can reach pesky fliers too. Cheating this on turn 5 is super sweet.

Burning Sun’s Avatar is today’s pseudo-Inferno Titan but less oppressive. However his ETB trigger is quite relevant since it kills majority of creatures in standard and can hit players too.  Then we have Verdant Sun’s Avatar which is a solid body with a powerful ability of bringing us back to our starting life totals or even higher. Since we are playing a bunch of 6/6s, 5/5s and a 9/9, gaining 12-20+ lives won’t be a surprise.

Aid from the Cowl not only cheats creatures but any permanent. What else can be great targets?

Form of the Dinosaur is not only thematic but can be your way to stay in the game if you’re very low on life. Going back to 15 after clearing the board (later on this) can be quite frustrating for your opponent, and having the ability to kill any non-indestructible creature over and over is super convenience especially if you have Verdant Sun’s Avatar our gaining you 5 life a turn thanks to…

Sandwurm Convergence. This card has seen a lot, and I mean a lot, of standard play these days after debuting in Bant Approach, Azor Gateways, Mastermind’s Acquisition and other Ramp decks. It does make the game state lopsided once  your opponent realizes he has no way to deal with a constant stream of 5/5s and can’t kill you from the sky.

Last is a one-off Curse, Overwhelming Splendor (another bulk Mythic I always wanted to play.). Essentially it pacifies your opponents threats by making them 1/1 vanilla creatures and it stops your opponent from activating anything non-mana. They can’t tick up or down their Planeswalkers, use Treasure Map to scry, reanimate with Scarab God and such. Though GPG still gets under this but that’s fine.

Thanks to Ixalan’s treasure mechanic, we now have ways to trigger revolt effortlessly. I tried to use Hidden Stockpile before but the mana base of using black is pretty clunky now.

Treasure Map on turn 2 raises the odds of finding our pieces and getting our survival cards to get to our cheat-state. Once flipped, it also ramps us for our bigger spells and gives us the treasures needed to trigger revolt.  Another good interaction here is using Trove of Treasure. With a constant stream of treasures, a Treasure Cove allows us to draw 2 cards a turn and trigger revolt at the same time. The bad side of Trove is not actually bad if you think of it because the opponent will still attack you anyway with or without the Trove.

In case we don’t draw into our Aid of the Cowl, we still want ways to cast the bombs faster and we need permanent based ramp to avoid diluting our permanent counts thus degrading the power of Aid. Gift of Paradise was great in my first attempt to build this deck but only have 4 copies makes it unreliable hitting it on turn 3 for a turn 5 Aid. Thanks to Ixalan, New Horizons helps raise the redundancy cards for the same effect. The +1/+1 counter is not as good as 3 life but we’ll take it.

We also need removal to stay alive long enough especially now that aggressive decks are getting even more popular. The emergence of GW tokens, Appeal/Authority decks, mono-green Stompy and RW Mettle decks pus the pressure on set-up decks like ours.

Ixalan’s Binding is our early answer to Planeswalkers and Gods which is one of the main pain points I see this deck has. Settle the Wreckage is there to help ease up the pressure when we’re on the draw when Fumigate is just 1 turn too late. Then again, Fumigate remains to be a great hoser for creature based decks not only because it resets the board but it also gives us some life back which can spell victory or defeat in many ways. We will limit our nonpermanent cards to a minimum so we’re only using these and not have Sweltering Suns, Abrades or Hour of Devastation in the deck.

To add one last win condition, I want to play with Nicol Bolas, God-Pharoah. This card is a stable in many Grixis decks, or even UB decks that play Treasure Map and cheat this later by popping a treasure token for red mana. We can do the same with our mana fixers and treasures as well. Having him a stalled game quickly turns the game in our favor because that’s what Good ‘ol Nicol does best.

Here’s how my Aid from the Empire deck looks like.

4 Aid from the Cowl

1 Form of the Dragon

Against control decks, we look deep into the empire and dig up more Dinosaurs that are perfect for counter-based decks. Carnage Tyrant and Nezahal work well to make sure you have the threats you need to close the games. Most control players will bring Torrential or Regal Caracals but our Dinos will make short work against them.

Against combo decks, Naya doesn’t have any interactive cards but thanks to our mana fixing, we can pull off casting Lost Legacy and Negates on these match-ups. They will not expect us to pack these in so an Approach player may decide to keep their configuration intact making them prone to a surprise Lost Legacy, or a Negate if they think they can win on turn 8 with a back to back Approach.

Against aggro decks, we will side in more permanent-based solutions like Baffling End which is great in taking down Earthshaker and Resilient Khenras, also good against Adorned Pouncer and Champion of Wits. Since we have ways to get to 5 mana on turn 4, Regal Caracal becomes a great solution against mono red or RB aggro decks. Cluttering the board and drawing out their removal only to be Fumigated the turn after is super sweet.

A quick sideboard guide for you guys:

Tha’s it for now! I hope you guys enjoy the upcoming holy week holidays. Please don’t spend all your time playing but also commit to do your religious obligations if you’re into that.

See you soon, and hopefully I can meet some Magic players in Singapore and find sweet ideas there to share!