We’re not talking about Ixalan here my brothers and sisters.

We recently held our store championships here in Manila and a friend of mine won the tournament with UB control that played Nezahal, Primal Tide.

This Loch Ness Monster of a dinosaur is priced so cheap it’s criminal! It wins games on its own, it’s a guaranteed 7/7 on the battlefield. It can evade any form of removal with enough cards to discard. Self replenishes your hand with cards you can use to activate him and removes your hand size limit. C-R-A-Z-Y good, right?

Unfortunately Nezahal only sits in the sideboard and with not many copies either. It’s inclusion into the main board is also quite narrow and I will not take this sitting down. 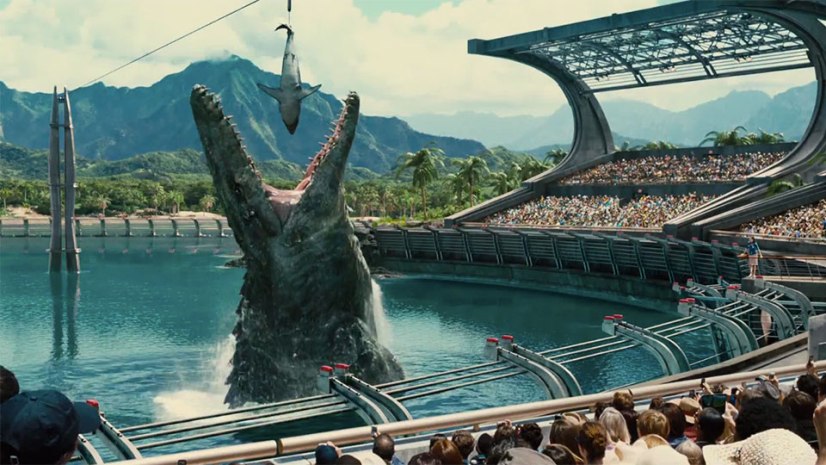 If you watched Jurassic World, the movie ended with a Nezahal-like creature called Mosasaurus eating the human-experiment-gone-wrong T-Rex called Indominus Rex , but it was with the help of a normal T-Rex and 3 Raptors that weakened it for the fish dinosaur to kill. You can look into the dinosaurs list here.

The T-Rex that helped kill the Indominus Rex in our deck tech today is Carnage Tyrant. Similar to Nezahal, Carnage Tyrant is also uncounterable, has 7 power, has Trample and Hexproof. If Nezahal can dodge removal for a price, Carnage Tyrant couldn’t care less.

Speaking of Indominus Rex, we will also play him but thankfully he’ll be on our side.

Ghalta is a 2-turn clock all on its own. We’re playing a singleton copy because he’s easy to kill, doesn’t have any way to protect himself, and we don’t have any efficient ways to bring his cost down.

These dinosaurs are great late game finisher but if we plan to win the through combat damage, we have to respect creatures that are not necessarily big but deadly nonetheless.

Kaladesh made 2 Aetherborns that are gifted with the luxury of having deathtouch (saw what I did there?). They don’t care if they are up against a 2/2, a 7/7 or a 12/12 just as long as they lay a finger of you then you’ll go down with them post-combat.

The problem with Blue and Green is that they were never given great removal in the history of Magic. Fight cards like Prey Upon, Pounce or Savage Stomp are no good because deathtouch applies to the fight mechanic. What do we do?

Take their teeth out, or keep them tapped. Aether Meltdown and Unquenchable Thirst are not just good at disabling deathtouch creatures but it’s also a good answer to early aggression. Unquenchable Thirst even takes down Hazoret if you have deserts and Aether Meltdown is no just good with creatures but with Vehicles too. Lastly we have Thaumatic Compass which is great these days because of the rise of control decks that usually hit you with 1 creature like a Torrential Gearhulk or Scarab God.

If Jurassic World really wanted a bad ass dinosaur, they should have merged Pterodactyl genes with the Indominus Rex or the Mosasaurus to give it wings. Thank god in Magic, we can do that for 2 mana, make them bigger, and net a card!

Imagine a flying, hexproof, trampling 8/7 crashing down on you. Or a 9/9 uncounterble draw engine. Isn’t it spectacular?

Apart from assembling the cards we need, we also need to shorten the amount of time we get to play them. Our dinosaurs are very mana hungry so it’s practical to incorporate some ramp into our deck.

Gift of Paradise does a swell job of ramping us to 5 mana on turn 4 and give us 3 life in the process. While Spring does the same but gives us card advantage late in the game. A hidden Mind in the graveyard can catch your opponent off-guard thinking you don’t have enough cards in hand to flicker Nezahal. Even if you have zero cards in hand, when an opponent casts a noncreature removal to target your Nezahal, you can simply draw 1 card from Nezahal’s trigger, play Mind’s aftermath cost to draw 2, then discard the 3 cards you now have in your hand and dodge the removal spell. Such a sexy move.

Why is getting to 5 mana on turn 4 so exciting and yet our dinosaurs costs at least 6 mana? Believe me, there’s a Reason. (… I’m on a roll here).

Reason lets us scry out next draws which is very important if we want to draw some of our early creature disablers, draw the lands we need, or position a Ghalta, Carnage Tyrant or Nezahal, Primal Tide exactly on the slot when you can cast Believe and put either dinosaurs into play by turn 4. A sample play sequence can be:

Not even a straight up RG Ramp Dino deck can ramp into a turn 4 Carnage Tyrant with turn 2 dorks without the risk of the dorks getting shocked.

With so many permanents lying around thanks to the many auras we play and lands we ramp into, we can effectively get the City’s Blessing quickly and we have 2 cards that work well with Nezahal.

Kumena’s Awakening is not as good as Phyrexian Arena and it’s worse without the City’s Blessing. However in this deck, it’s essentially a one-side Howling Mine which allows us to effectively spam Nezahal’s flicker ability. Without maximum hand size, we don’t care if we get stuck with a full grip or more. Arch of Orazca also helps us draw our Cartouches or One with the Winds to get damage through.

1 One with the Wind

Before we discuss the sideboard let’s talk about the lands just a little.

The deserts are not just to trigger Unquenchable Thirst’s tapping ETB trigger but they actually help us in the course of the game.

Hashep Oasis makes our dinosaurs 10 power reducing the clock from 3 turns to 2. The less draw step our opponent gets, the better for us to close the game. Ipnu Rivulet is nice to have against Approach Decks because we have no way to interact against that deck in game 1. With 9 deserts in total, we can also mill our opponent a substantial amount of cards. Lastly is a single copy of Scavenger Ground to help us against Scarab God decks. All these advantages do not take extra slots which makes them even better.

Crook of Condemnation is not just for Scarab God but it helps prevent Search for Azcanta flipping. It’s also good against GPG decks, Torrential decks, eternalize/embalm Anointed Procession decks. Such a small amount of investment to cover decks we have no ways to interact it is a solid sideboard card.

Essence Scatter helps us against an opponent’s Gonti resolving. It’s also good against Gods. I don’t mind using it to counter a Gifted Aetherborn or Glint-Sleeve Siphoner early in the game.

A complete playset of Negate will help us counter Planeswalkers, combo pieces like Anointed Procession, Gate to the Afterlife, Approach of he Second Suns or whatever we can’t attach an aura to.

Naturalize is there for any nuisances that get past our counter magic. Particular for Search for Azcanta and Hidden Stockpile when we are on the draw. I don’t mind having access to removal for Ixalan’s Binding which the opponent can use on our Cartouches.

We don’t have access to board wipe but we can at least send everything back to our opponent’s hand and have our dinosaurs waltz in effortlessly. This is great against tokens most especially.

Sea Legs is there to give us a better change against Mono Red and Red-Black Aggro. A 1-drop that negates Khenras, Bomats, Soul Scar Mage, Dread Wanderer and can shrink Scrapheap Scrounger and Ahn-Crop Crasher is super awesome. Not to mention that it can be flashed in against Toolcraft Exemplar before the beginning of combat making it too small to crew a Heart of Kiran!

I am pretty impressed how his deck looks on paper. Can’ wait to build and try it out! If you have the cards lying around, put it together and bring it to your next FNM and treat your LGS to a block screening of Jurassic World, MTG Edition.